Hope Force is committed to rapidly and effectively responding in the immediate aftermath of a disaster. However, we also focus on the critically important recovery and rebuild needs of a community. It is often in our immediate response that we encounter the most vulnerable and least empowered survivors.  It is “the least of these” that Hope Force seeks to assist in the arduous task of rebuilding their home.  Many of these people are elderly, economically challenged, uninsured and/or physically unable to take on such an overwhelming task.  Below are just a few examples when Hope Force has had the honor of serving with our rebuild efforts.

Fast forward to 2012 Hurricane Sandy, Hope Force responded in Atlantic City, NJ which was severely impacted by flooding. Hope Force had the privilege of being a catalyst to rally local leaders together and helped form a long-term recovery group. We staffed the long-term recovery group over the next year as it transitioned to local leadership. Hope Force rebuilt 15 homes while also continuing to clean out homes still in need of help from the initial disaster.

2017 Hurricane Harvey slammed Texas and devastated many communities with over 4 feet of water. After spending several weeks in Houston mucking out homes, Hope force made a strong commitment to the people of Vidor Texas. This expression of compassion was done in partnership with a local pastor, Skipper Sauls. Pastor Skipper is a man of peace who loves to serve his community. Our partnership over 15 months resulted in providing financial resources and volunteer labor contributed toward directly serving hundreds of homeowners in the community.

Through Hope Force rebuilding programs, we’ve been able to serve homeowners in Baton Rouge, Louisiana impacted by the 2016 tropical storms as well as the wonderful people in Columbia, South Carolina that were hit hard by Hurricane Joaquin in 2015. Recently, rebuild efforts took place in our backyard of Nashville. We were able to rebuild a home that was devastated by the tornadoes from March 2020.  Waverly, TN was devastated by flooding in August of 2021 and rebuild efforts are underway as this is being written. 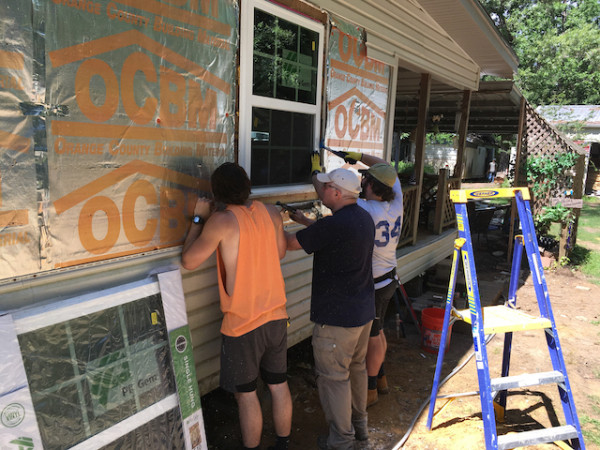 Check out our Events Section of the website for current rebuild programs.

In August 2021 Waverly, TN experienced torrential rain which caused horrific flooding. The small town was not only devastated, but 20 people perished. As with most rebuilding projects, Hope Force Reservists developed relationships with the homeowners that we served and realized that several of them had no financial means to rebuild. Hope Force entered into a rebuilding program with two families and are installing new plumbing, electrical, insulation and drywall and finishing with cabinetry, trim work and flooring.

Lake Charles, LA was devastated by Hurricane Laura, and the damage was overwhelming. As if this weren’t enough, a few weeks later, Hurricane Delta struck another blow to this already beleaguered community.

Mr. McDaniel’s neighborhood was devastated by the Nashville March tornado.  Hope Force mounted an effective relief effort with a focus on placing tarps on damaged roofs. Mr. McDaniel’s home was severely impacted — his roof was virtually destroyed.  Hope Force had the privilege of rebuilding his roof and applying numerous tarps in an effort to prevent further water damage.  Shortly thereafter, in collaboration with a local roofing company, Mr. McDaniel’s home was completely re-shingled and restored to a status that was better than ever.

Hope Force is committed to serving not just in the immediate aftermath of a disaster, but we engage in the relief and rebuild phases as well. January 2018 a group of Hope Force volunteers and Reservists participated in an important rebuild project in Texas.

Come join us and make a world of difference!

Stories from the field

Here are stories about what’s currently happening and your best way to stay in-the-know of our efforts to help those in need.

HOPE FORCE RESERVISTS: If you are available, please contact…